The Open Core model is the most successful and widely adopted and implemented model for the development of commercial open source software (COSS) companies. There is plenty of information available about the business case for Open Core, and the success of Open-Core-based COSS companies.

Open Core models always have at least two licensing strata, and sometimes more than that. For example, a simple Open Core model might look like the diagram on the left: 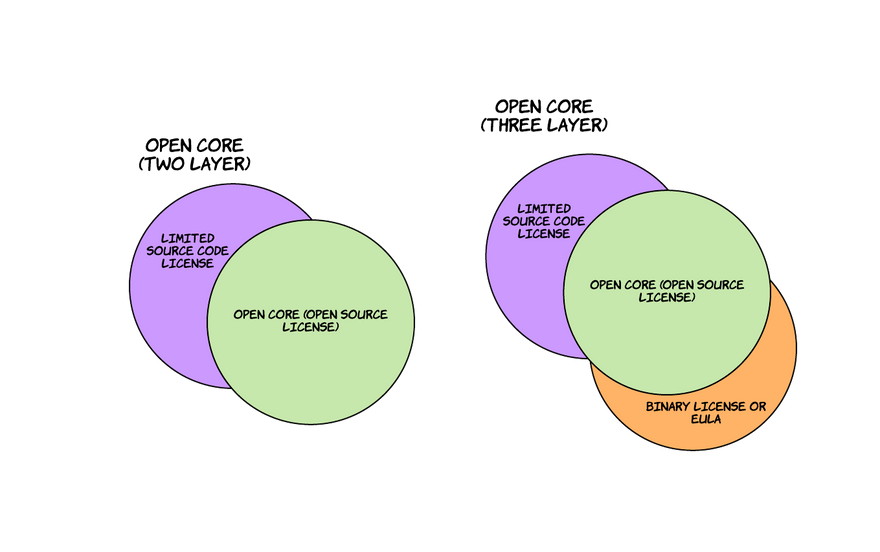 Visualizing Two and Three-Layer Open Core models
In these two models visualized above, the core is licensed under a standard open source license like Apache 2.0, and the commercial portion (which I will call the “frosting”) is licensed under a source-available license like PolyForm Non-Commercial (referred to in the diagram as the limited source code license). In this model, a non-commercial user can use the entire code base, modify it, and redistribute it. But a commercial user would have to negotiate for a commercial license, only for the frosting portion. The open source Apache 2.0 portion is, of course, unrestricted.

Some companies take a three pronged approach instead, as depicted on the right. They may have three strata of licensing instead of two. In this case, we see the Open Core licensed under an open source license, and two flavors of frosting, under a source code license like PolyForm Non-Commercial, and a binary frosting under traditional end user license agreement (EULA) terms or similar limited binary license.

Of course, there are many variations on the Open Core model, and each variation is a strategic business choice based on the type of software and its market.

One important feature of PolyForm licenses is that they make the source code available, and almost all of them allow for modifications. So, while Open Core has sometimes been implemented with only an Open Core and a binary license (two types of licenses, not depicted above), that can be harder for customers to use. Today, customers expect the flexibility of access to source code, particularly when they are working around an Open Core.

Another important intentional design and valuable feature of PolyForm licenses is that they are frictionless. They do not require a click-wrap or paper agreements. They are deployed in the same manner as open source licenses — without the need for licensing formalities.

PolyForm, therefore, is especially useful for Open Core purposes. It’s no accident that many of the companies deploying Open Core models use source-available licenses already in their quiver of licensing tools.

If you are an Open Core developer, and want to deploy your software quickly and easily, PolyForm allows you to choose standardized licenses for your whole product, and negotiate alternative licenses as you need to. That way, you can save your legal fees to hire lawyers only to negotiate licenses with a price. Standardization also saves time and trouble for your customers, because it helps them understand your licenses more quickly and easily.

Having a stable of off the shelf, standardized, plain language software licenses is a good thing https://t.co/VPG4ffE7zm
— Adam Jacob (@adamhjk) July 15, 2019

How to forget about being commercial open source, and sell Coca Cola.

For An Open Future