Since OSS Capital's founding in September 2018, we've been very data driven. Perhaps the most important quantitative factor motivating our existence has been continuously updating this spreadsheet which tracks every COSS company in history to have reached > $100M in annual revenue. This very popular dataset has been widely cited in the industry. When we started maintaining this data in 2013, there were only a small handful (less than 10) of COSS companies that had ever reached this important revenue milestone. Amazingly, over the last 5 years alone, this "COSS Index" has grown to more than 40 companies... producing more than $100B in realized outcomes... and more than 10 IPOs by companies that largely did not exist within the previous decade (HashiCorp, MongoDB, Elastic, GitLab, Confluent, Talend, Cloudera, JFrog, Kaltura, Couchbase + more)!

Not only has the COSS category grown dramatically over the last decade, from $10B (where 90% of that value was concentrated in a single company: Red Hat), to $500B+ today, where $400B+ in value has been created in the private markets, across dozens of large companies... but additionally, the sheer amount of pre-IPO VC investment in this category across all stages over the last few years has been nothing short of astounding. Even so, we are still in the early stages of COSS as a category, which we believe will grow into a $3T+ (trillion) dollar category by 2030~.

Today, as a continuation of doubling-down on expanding our data and research efforts across the COSS category, we're excited to share a new first-of-its-kind "COSS VC Funding" report.

This database focuses on tracking all publicly announced funding rounds in COSS since January 2020 (32 months of data) across:

What is a COSS company?

First off, let's outline our fundamental sorting criterion for this data:

We define any company as a COSS company if it would not exist without the coexistence of a given open source core technology.

It's easy and common to conflate these companies with SaaS companies, but they are fundamentally different. In our view, COSS companies are a different species of software company. Importantly, our definition is agnostic to the specific business model of the company. As a result, we like to think of it as a kind of first-principles definition -- one which if reasoned "up" from can reveal many distinct advantages and unique properties that only COSS companies possess on many dimensions:

We are continuously adding to this data on a daily basis and strongly encourage contributions!

Here is the public sheet with the raw data.

Here are the first several graphs we produced that highlight notable insights from this rapidly growing data:

This chart shows the total VC funding into COSS across all stages, by month, since January 2020. In total, 32 months of data representing $24B ~ in capital deployed into COSS companies.

Nearly 10 out of 32 months broke $1B+ in a single month, with the biggest funding months being February 2021 and September 2021, respectively.

Interestingly, other than the slight slowdown in July and August, we have not observed a material slowdown in COSS relative to the broader VC / public market crash that started last November.

Notably, in the recent months of February, March, April and May this year, each month unveiled $1B+ in new funding announcements. 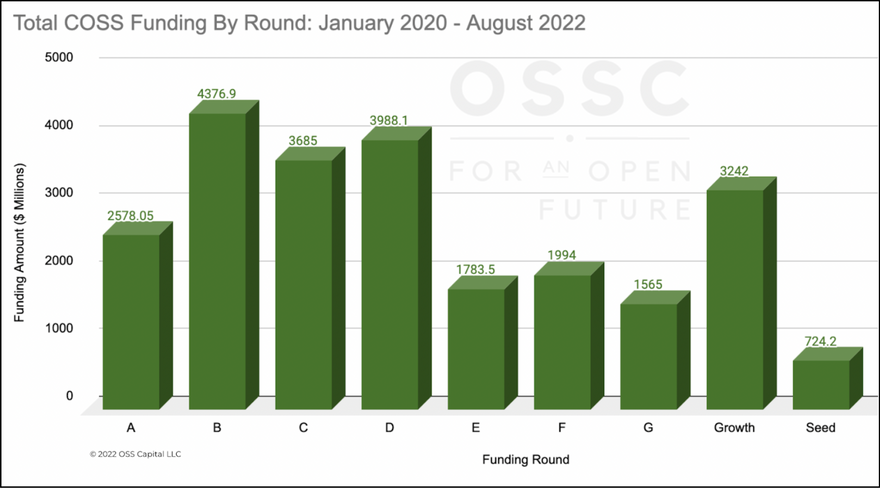 This chart digs into the total funding deployed across all stages from Seed (far right), A, B, C, D, E, F, G and Growth (essentially Pre-IPO rounds).

For more context, there were: 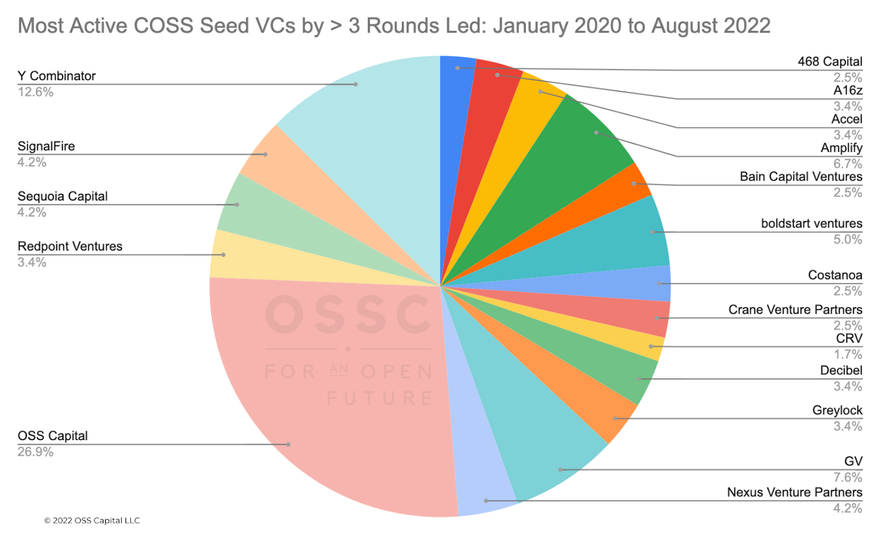 Double-clicking into the most active Seed VCs cohort (across 159 rounds), this pie chart shows the distribution of VCs who led > 3 Seed rounds.

OSS Capital being the most active by a wide margin should come as no surprise (*includes 10~ unannounced Seeds), but YC has also been very active, increasing the number of COSS startups admitted in their most recent several batches.

Many top-tier firms like Sequoia and GV have also been very active early stage COSS investors.

Zooming out across the entire dataset, we highlight the most active firms by sheer number of lead investments (more than 5) in COSS across all stages. It goes without saying that many of the most successful VCs in the world are systematically focusing on COSS as a major theme.

We created this graph to visualize our thesis: “Open source is eating software itself much faster than software is eating the world”.

These two waves illustrate the fundamentals of open core vs. closed core tech companies from the lens of market category size and value capture.

The area under the curve of closed core software companies has reached $10 Trillion +, but we believe the growth rate of this approach is slowing overall.

Meanwhile, over the last decade in particular, the area under the curve of value captured by COSS companies (while smaller at $500B~) is expanding much more rapidly.

We believe ALL digital technology companies will eventually be transformed by open source innovation at the core, and consequently, the open core / COSS business model... the question is not if, but when.

We're placing our bets. Are you?

Will COSS eat up the Enterprise IT channel and resellers?