Like most things in life, progress happens gradually on a spectrum of iterative changes over time. The same is true for business model evolution in commercial OSS companies. 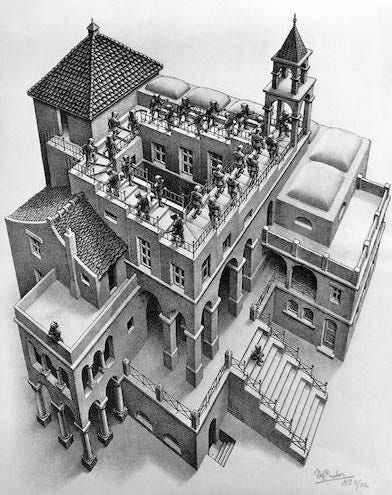 M.C. Escher’s “Ascending and Descending” lithograph. March, 1960.
In this post, we’ll explore the following at a high level and reserve greater detail for future posts:

I  have scoped the following progressions based on what looks like an  ascending sequential order, but many companies choose to start off  directly with building a Cloud or SaaS product, ignoring all ‘previous’  steps. There is nothing wrong with this. However, observationally, after  considering the many data-rich examples in COSSI over the past several years, the following logical evolution of business model experimentation many commercial OSS companies go through  has been / is fairly consistent (again, from what I have observed):

Visualization of common business model progressions taken by commercial OSS companies.
Let’s dig in! Starting with Services through to SaaS:

Open Core (everything before ++):

As the basis for explaining these business model progressions, I use a continuous staircase analogy found in Penrose stairs — also the inspiration for Escher’s “Ascending and Descending”  lithograph, depicted in the opening of this post. Why? Because there is  no “final step”.

Sometimes, though, stairs aren’t for ascending… 😏