Data overwhelmingly shows that open core (OC) is the dominant business model used by the most successful COSS companies.

OC is the most misunderstood and polarizing business model implemented by COSS companies.

Polarizing because pure OSS maximalists (mostly consisting of staunchly “pro-Red-Hat-business-model” types) quickly shun OC and go as far as synonymizing it with “fauxpensource”. This is, simply, glib.

Leaving all of these silly misunderstandings and polarizations aside, I re-introduced the COSSI in a previous post: an actively maintained Google Sheet of top-quartile commercial OSS businesses. One major conclusion to draw from COSSI’s data is that** open core is the dominant business model used by the most successful COSS companies.**

Note that I’m not saying that pure-OSS business models (training, support, services) are bad or can’t work. On the contrary, there are a few successful examples… but just a few (WSO2, Hortonworks, Red Hat), not many.

I believe $110B+ of value has been “captured” by OC-based companies (50+ examples, 30+ in COSSI) vs. maybe at most ~$30B (by really one single company: Red Hat) using pure-OSS models (support/training/services only).

What is open core?

Open core is a business model for the monetization of commercially produced open-source software…the open-core model primarily involves offering a “core” or feature-limited version of a software product as free and open-source software, while offering “commercial” versions or add-ons as proprietary software.

While this definition covers some fundamental aspects (open core is fundamentally a business model for monetizing OSS), it conflates, omits and under-defines much: 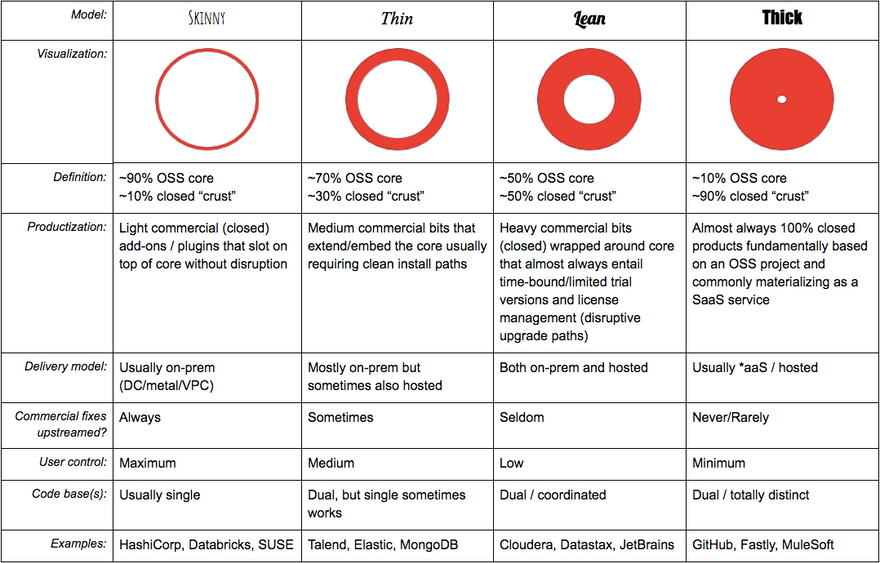 How is open core implemented?

Definition: The most fundamental aspect of OC lies in the question of “How much stays open vs. How much stays closed?”. I propose four roughly static snapshots of looking at this: skinny, thin, lean and fat. It can get far more nuanced and complex than this, though. In a future post, I will elaborate on what I call the “OC constant”, which is the continuous level of energy spent by OC companies (always across all functions: sales, marketing, engineering, product, delivery, etc.) to find the “OC equilibrium” which is the right balance of open/closed that yields product market fit and scalable revenue. Levers and knobs are constantly pushed, pulled and tuned in order to optimize and discover this equilibrium.

Productization: OC replaces (or extends) OSS projects with commercial products. As a consequence, the materialization and manifestation of the way those products come to life “productization” is a function of how OC is implemented along the spectrum I outline above (and all the ways in between skinny/thin/lean/fat).

Delivery model: This is really code for “How are the OC product bits shipped to a customer and/or consumed by said customer?”. OSS is used everywhere: on-prem in physical data centers, in the cloud, at the edge, etc. As a consequence, the vendors behind these OSS projects (the commercial OSS businesses) need to deliver their products into all of those environments reliably and with strong guarantees and consistency. Often, delivery models cover the gamut regardless of how OC is implemented, so this is a tricky one.

Commercial fixes upstreamed?: Typically, a given “successful” COSS company is the main committer (by full-time contributors employed by the company, influence over the roadmap, control over the codebase, etc.) behind the OSS project they are commercializing. The balance of what the upstream “pure OSS” non-customer user base sees and demands of the OSS project needs to align with the maturity path of enterprise customers and industry adoption (in production environments) of the OC product. This is another post entirely, so I’ll just leave it at that. In “thick” OC models, major changes are almost never pushed back upstream — minor ones are, of course, but because the OC product deviates so much/adds so much on top of the OSS project, there is little incentive, let alone demand to commit back.

**User control: **User control really means “How much is the pure OSS user community / individual able to influence and control the roadmap, direction, design and life of the OSS project that the OC product is based on?”. In “thick OC”, this is typically very hard since the project is almost entirely controlled by the company building product on top of it. Exceptions abound here, though — this is not always the case.

Code base(s): Often times, the OC product and the OSS project will be maintained in separate code bases. From what I’ve observed, it is best if there is tight integration and alignment with the engineering direction and knowledge across both code bases even if they are totally separate — which they usually are.

Examples: Some of these examples might be better classified in different models, so please don’t take this table as the final perspective here — referring back to the “OC equilibrium”, the one constant in OC is change. The model is always being fine-tuned and it is not uncommon for a company to start off “thin” and grow into “thick” over time… or even get “fat”. 😃

Finding the “Open Core Equilibrium”: When should open core be used?

If a given OSS project sits at a layer in the IT / software stack where there is historical conditioning to allocate budget or pay for production use — for e.g. where enterprise infra / platform / sw ops teams really “Feel” the pain of running said software in complex environments, this is usually a major factor in determining whether the project is a good candidate for the OC model.

Another big factor is how widely adopted the project is — not just in gross # of users, downloads, etc. but how “strategic” the project is becoming as a standard system in the industry and how quickly that happens.

One other huge factor, IMO, is whether the project meets the following criteria:

The OSS project must have a high propensity for a single vendor model vs multi-vendor model!

What is a multi-vendor model? Hadoop is a project that has many vendors and this has made commercialization of the technology extremely competitive and difficult (competition eats profits and speeds commoditization, which is essentially bad). Kubernetes is another great example. As is OpenStack. As is Linux. As are other projects that do not have one single major company entity contributing most of the code/driving most of the influence.

There are exceptions to this all around! However, I will end by paraphrasing Andy Grove with “the last to commoditize thrive” which I believe means that in order to capture lots of value around a given OSS project, the rate of commoditization above the core must be controllable by a single entity to better adjust the value generation/capture dynamic over time.

In a future post I’ll explore details that go into determining how a given OSS project can have a high propensity for single vs multi-vendor commercialization dynamics.