Open source software represents the biggest paradigm shift in technology since the rise of the internet and will disrupt major industries like cloud computing and create far larger new ones as a result.

Extending Marc Andreessen’s “software is eating the world” axiom, this fun “fish food chain” analogy by Alexis Richardson visualizes how OSS is eating software (I strongly agree) and subsequently how Cloud is eating OSS (I fairly strongly disagree, after thinking through this more)…

And multi-cloud is going to eat cloud 💥 https://t.co/lasdEv8gYypic.twitter.com/saDXLS54qY
— bassam (@bassamtabbara) May 16, 2018

Bassam Tabbara followed up with the above continuation saying “Multi-Cloud will eat Cloud”.

Ultimately, I think an improved way to describe what is happening is by looking at OSS as the fundamental enabling lever for all new technology paradigms, platforms, companies and patterns of the future which actually supersede all of software and cloud computing (including multi-cloud which, IMO, eventually becomes the modus operandi of running all distributed systems on the internet — curiously powered by OSS). 👀 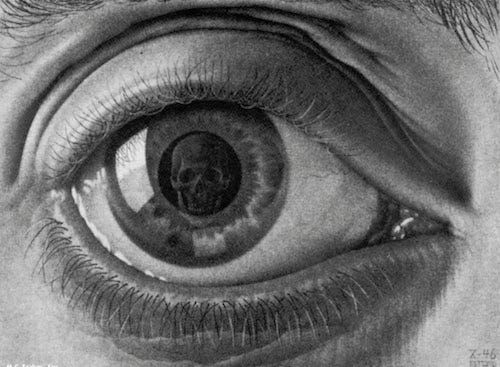 Eye. M.C. Escher. Mezzotint. 1946.
It is abundantly clear, to me, that OSS will disrupt all existing software and tech industries eventually (over a highly heterogeneous transition/bridge from here — a mostly prorpietary world — to there — a vastly OSS world) and form entirely new technology categories as a result/in the midst of major new growth areas across the global industry landscape.

In short, software may be eating the world, but we’ve since mostly past that transition and moved on to open source software (OSS) really primed to eat everything (including “software” which implies closed-source proprietary products, in my mind).

To examine why one specific and exciting new (only ~10 year old) industry is on the cusp of getting seriously shaken up by OSS, let’s dig more into cloud computing…!

In order to appreciate just how fast the world changes in 5 year increments, let’s examine what the top three cloud providers looked like 5 years ago along a few distinct dimensions, what they look like today and what they might look like 5 years from now!

5 years ago, the cloud computing market started to hit full stride, but was nascent in terms of more stable abstractions and platform services:

What does “Cloud Computing” look like today, 5 years later?

Two distinct markets that are of roughly equal size and feed off each other: commercial OSS (~$100B+) and cloud computing (~$150B+). VERY few people see and appreciate this. They are not orthogonal, but they are distinct. Both are about 10 years old. The former eats the latter.
— Joseph Jacks (@asynchio) August 15, 2018

It is clear that OSS will unlock the future potential of cloud computing in a world that looks very different from the one we are in today.

This has already started to happen… EC2 is a black-box indirect commercialization of Xen (OSS hypervisor) where AWS captured lots of value around the business value of spinning up a compute instance more quickly and ephemerally than ever before, unlocking Jevons paradox. However, we now see Kubernetes basically replacing EC2 as the abstraction for compute (Google’s superior OSS-first strategy I alluded to before.. explicitly chosen to speed the commoditization of the more fundamental proprietary IaaS/PaaS services their competitors have assumed massive network effects around). K8s has now forced a funguble and liquid compute dynamic across ALL the leading clouds — AWS/Azure/GCP. This is just the beginning.

Does OSS eating cloud computing mean the clouds are commoditized to zero? No, but it speeds that effect up dramatically. Google is doing this intentionally as a strategy to leapfrog ahead to #1 above AWS and it is smart. Interestingly, though, an OSS-first cloud aaS service development strategy offers FAR faster **innovation* cycles than clouds themselves can build on internally even with millions of customers. That is because OSS has billions of customers.

For what it is worth, that train has already left the station. See this slide from my talk earlier today. That ecosystem is proprietary and that’s okay. pic.twitter.com/AYT6BzvPEy
— Subbu Allamaraju (@sallamar) February 16, 2018

Next, we’ll dig into why, after or a bit later than OSS eating cloud (probably 7-10+ years out), OSS will then eat all of SaaS.