Today, we are excited to “Open-Source” a new data resource that continuously tracks and analyzes every COSS company that has gone public since the Red Hat and VA Linux IPOs in 1999 and 2000.

Over the coming weeks and months, we will be launching an interactive application that provides even greater data querying, visualization and analysis capabilities.

For a retrospective and current analysis, we will also offer insights into how these COSS companies have performed pre-IPO, during-IPO and post-IPO (many were acquired or merged post-IPO).

Before we explore the actual data, let’s cover our motivations for creating this new resource for the growing COSS ecosystem! 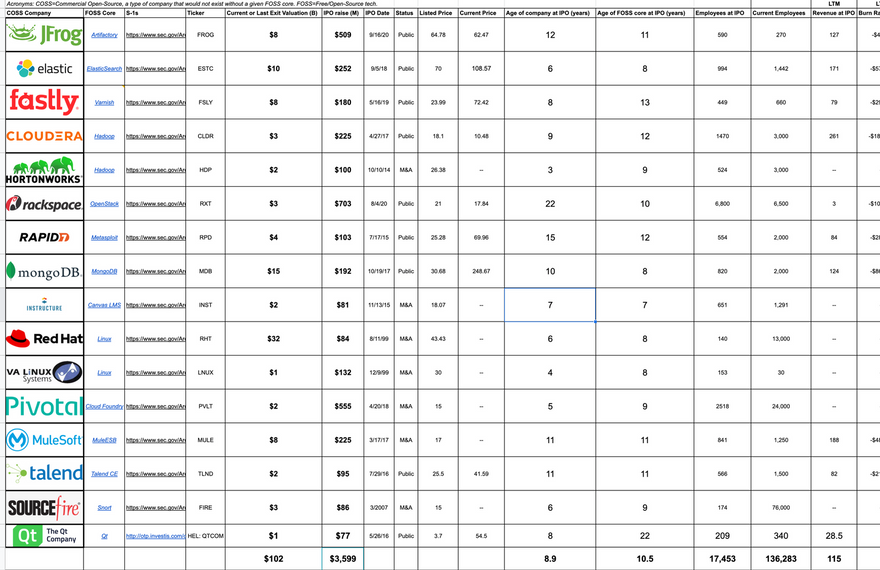 We are in the process of relaxing the $100M revenue constraint in this index down to $10M~, including far more private up-and-coming COSS companies than ever before. Expect this list to grow from 50~ to 100+ and with a much wider range of rich data points!

Over the last 7 years from 2013 to 2020, we have seen this “large-cap COSS index-of-sorts” grow along the following dimensions:

We believe this data in the COSS Index represents more than enough data to convince us of a trend:

More COSS companies will enter the public markets via many mechanisms (DL IPO, SPAC IPO, traditional IPO, etc) over the next decade than have gone public since the year 2000. We expect at least 25 more COSS IPOs by the year 2030, in addition to the 15 that have already gone public.

Why do we believe this? One primary reason: The fast growing size of the $100M revenue COSS index (still largely private companies) clearly indicates that many private COSS vendors are ready to go public now!

Specifically, GitLab, HashiCorp, Odoo, Databricks, Conflent and others. All of these companies have reached at least $100M in revenue and several have achieved $300M+ in ARR.

Since the founding of OSS Capital in 2018 and our research going back to 2013, we have strongly believed that COSS companies are fundamentally different and should be recognized as such, as compared to fully proprietary companies. At large, it is clear that many more private market investors are starting to recognize this, too, as evidenced by the notable and recent (over the past 1 year) wave of VC-driven COSS frameworks, blogs, thought pieces and more:

Here are the data points covered in the COSS IPO Dataset which will provide the basis for extensive analysis in subsequent writing and blogs from here: