Hope everyone has ironed their YOLO t-shirts and booked tickets to Grapevine, Texas for Gamestop’s Annual Shareholder. It was a wild couple weeks for the public markets as investors fixated on meme stocks, hedge funds, brokerage firms and the rise of retail. The private markets were less active but still had their share of big announcements. Lastly, the friction between open source platforms and big clouds hit it’s breaking point with Elastic and Amazon in a trend that will continue to impact companies across this ecosystem (a topic we will explore in future weeks).

In this edition, I spend time with Higinio (“H.O.”) Maycotte, the co-founder and CEO of Molecula, the first cloud-based feature store to bridge the entire spectrum from data readiness to MLOps. Molecula just raised a Series A ($17.6mm) from Drive Capital and H.O. provided some invaluable insights behind the process of building an enterprise OSS company.

Databricks, a big data analytics platform, is in talks to raise a private funding round that could value the company at between $27-$29 billion.

Molecula, an Austin-based enterprise feature store built for machine-scale analytics and AI, raised a $17.6 million Series A round of funding from Drive Capital.

Snowplow, a London-based data management platform, raised $10 million in Series A2 funding. Atlantic Bridge led the round and was joined by investors including MMC Ventures.

To track the performance of OSS companies, I created an equal-weighted index comprised of public names including: MongoDB, Datadog, Elastic, Talend, Cloudera, Rapid7, Fastly and Jfrog.

Over the last year, the OSS Index significantly outperformed the benchmarks: 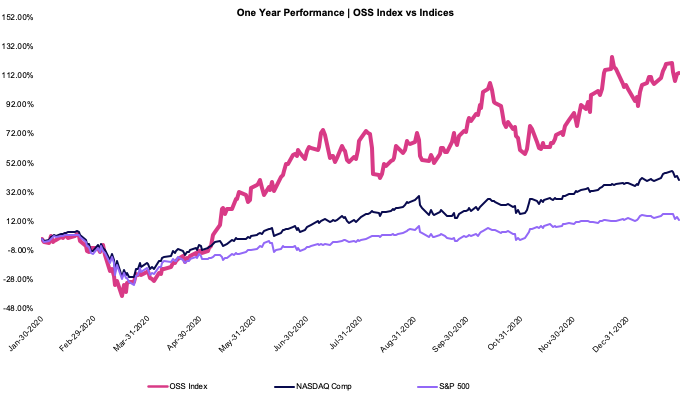 Over the last three years, the OSS Index continues to outperform: 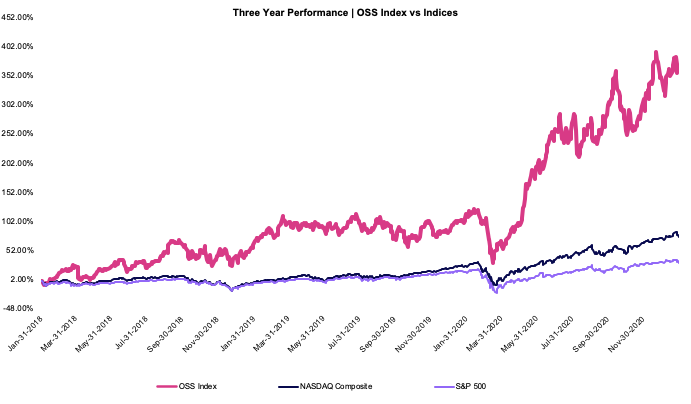 While OSS companies have historically traded at or below cloud multiples, that trend has continued to stay inverted in the post-pandemic markets. 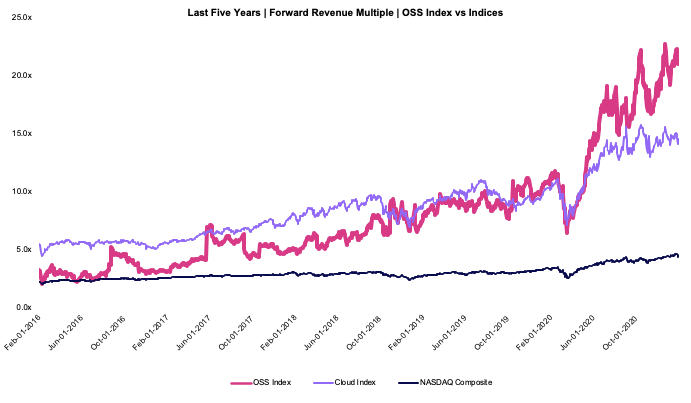 Interview with Higinio (“H.O.”) Maycotte, the co-founder and CEO of Molecula.

How did you get involved in open source to begin with?

[H.O.] Yeah, so really, when we first spun out our patents from our last company, and we knew that the technology we had could potentially be very pervasive, we realized that building a top-down sales model up front would be very difficult. And we wanted feedback from the universe, in terms of how they would use our technology. And so we took a risk, because we had nine issued patents on the core technology, and we picked some of the key components from those patents and open sourced them in the project, Pilosa, to see how the world would leverage this technology. And it turned out to be incredibly useful.

We don't have the biggest community in the world, but we have a pretty vibrant community. And more importantly, we found some amazing use cases that we couldn't even have contemplated. For example, operating regulated industries. A lot of our user base operates in regulated industries. So it helped us really understand the types of workloads and use cases that this technology could potentially unlock. And based on those learnings, we architected our enterprise plan. And we're now in a mode where we are going to be enterprise-first, open source second, but still want to have an incredibly important open source component to how we bring leads into the business.

Was there a point where you made the decision between closed source and open source?

[H.O.] Yeah. I think the biggest decision we've made, and I think we're going to stick to it, is that the roadmaps for the two products are pretty different. So if you look at other traditional projects like Kafka or Elastic, the commercial versions of those technologies are very similar to the open source versions of those technologies. A lot of the monetization is happening in service and support, some key enterprise features, and certainly, the online versions of those technologies. But the feature parity is pretty similar. If you take a Venn diagram of the value proposition for each of the projects, whether it's enterprise or open source, they're pretty similar. We decided that we wanted to maintain some overlap, but that we wanted the Molecula, the cloud-based feature store, the enterprise version, to be completely online, and to have a lot more functionality, and a differentiated value proposition than the open source component.

There's still parts that overlap. Open source is about a feature-based file format, and the online version is about a feature store and all of its functionality. So there is a Venn diagram, it's just not as overlapping as we've seen traditionally over the last five years in other successes. And so the key to making that work is thinking of what the on-ramp is going to be, so that you can convert those into enterprise customers and into enterprise sales. And so that's the part that we're trying to figure out right now is, how does open source be that on-ramp? And it continues to be. I'd say about 40% of our leads are still coming from open source. So that's going to be our continued struggle is figuring out, how does one lead to the other when the Venn diagrams are as overlapping as they might be?

That's an interesting point, because it is a challenge for a lot of companies: how much overlap should there be between the open source and enterprise version of what they’re offering?

[H.O.] Exactly. And we're even organizing our engineering teams that way. I have a new head of engineering joining shortly, and we're going to maintain a core platform team and a cloud team. And so the cloud team is going to be wrapping, continuously, services and features and experience around the cloud delivered product, the enterprise product. And the platform team is going to be laser focused on the core feature first format. And so we're going to try to maintain that separation. And obviously, that's where most of the contributions to the open source will continue on our end. So we'll see. But I'm pretty excited about the strategy.

Given the growth in the broader open source category, would you say it’s become an accelerant to funding?

[H.O.] I think it really depends on the DNA of the team. I think if you need a top-down sales model to reach your buyer, it's going to be difficult to go the open source route. If you need the adoption from the engineers to go be your salespeople and your avid kits, then bottoms up, open source makes a whole lot of sense. And I think that today, we're going to see some experimentation with hybrid models, which is what we're doing.

Being able to quickly let a data engineer test and try the technology without having to go do a deployment, is incredibly valuable. And even them finding us and discovering us is really valuable. But our sales are very large, six, maybe seven figure deals as we go into next year. So it requires that top down sales motion to be partnered with it. So we are going to try a hybrid approach, but I certainly think it depends a lot on the makeup of your team, and on the go to market that you want to center your business around.

[H.O.] Yeah. I think that, first and foremost, I believe that having the right investors makes all the difference in the world. Someday, I will write a book around, just because you can raise it doesn't mean you should, which is really applicable in this entire environment. I think there is still a handful of investors out there today that are really good at scaling these business models. Martin Casado at Andreessen, Salil Deshpande who was at Bain, and Michael Volpi at Index. There's a handful of these folks that just like to take the risks and take the risk as it continuously is adapting and evolving. So I think, first and foremost, try to align yourself with an investor who really understands open source and is leading the strategies and changes that are happening in open source, and not just someone who wants to invest in open source because it looks interesting. I think there's a difference there.

And I think some of the things that are obvious to all of us now is that things like number of stars aren't necessarily representative. They might be leading indicators about the success of a project, but much more importantly, how engaged is that community and where did the contributors sit? And I think I would further add, what large-scale production deployments are using that technology? And I think those are the proof points that show the potential for commercialization, if you can really see these projects making their way into large scale production environment. So those are some of the things that I would be thinking about if I was starting from scratch.

What should founders focus on to get the most from the open source community?

[H.O.] This is going to sound obvious and impossible all at the same time, but ideally, you're coming out of a big brand company. I still think it makes a very big difference to be spun out of Uber or be spun out of Facebook or be spun out of Google, as a project, and maintaining that support from the company in which it came out of, because marketing and awareness really, really matters. And so being able to have community managers and community awareness about your project is as important as having a really good project. And so if you can come out of a company who's willing to let you do that, that's always important. And if you can't do that, having co-founders and community managers on board that can get the attention of the community is critically important. Because if you build it, they will not come.

So it doesn't always have to be that way, but having a developer, essentially, a brand, to your persona and to your co-founders and to the project and to where that project was originated from, makes a really big difference.

It's like the grassroots really matters. And some of the grassroot tools like Hacker News, they're very hard to hack. It has to be genuine networks getting genuine interest. And the more your network is already plugged into that, the faster those pumps prime. But the biggest jumps in stars often come from a Hacker News post going viral. And again, that's going to depend on the quality of your network and all of that.

As Molecula has grown, what piece of community feedback has resonated with you?

[H.O.] Yeah. I think if you're out to make money on open source, the main piece of advice that has always sort of resonated with me is that open source is not a business model. Open source is part of your go to market strategy. Open source is a way to get lower cost leads into your funnel. Open source itself is not a strategy, except for a few, like Red Hat being the prime example. Service and support was their business model. And otherwise, it's a form of marketing. And so you've got to really, really think about it that way. It's a way to get awareness and to get leads into your funnel. And then you better have a business model that can convert that into some sort of differentiated version of the product that you can then monetize. Again, if you're out to make money.

What is best resource (book, video, site, etc.) that has been helpful in enabling your growth?

From Contributor to Employee: Hiring Tips for Great COSS Companies

What Are the Advantages of Using Lead Management Software?